Again, starting off with sad news... Love Angeline has also decided to close her doors! It's not happening until February but it will be happening and they are slowly cleaning out inventory. I'm not totally surprised by this announcement, as Natosha had previously posted she had considered closing Love Angeline, and recently handed the reins of the business over to a friend, even though she was still making all the polish. So while not unexpected, it is a shame because she has produced a lot of lovely polishes and I have enjoyed them! Luckily for you, I'm behind in all the polishes I do have, so you will some other lovelies from this brand.

10/16 is a deep olive green holographic. There's not much more to say there! It's a nicely pigmented polish and was maybe a titch on the thicker side, but nothing difficult to work with. Usually I make a quick note if I used two coats, so I think I must have used three here, though I feel like two would have been fine. I don't have much more to add-- I didn't have any issues with this! 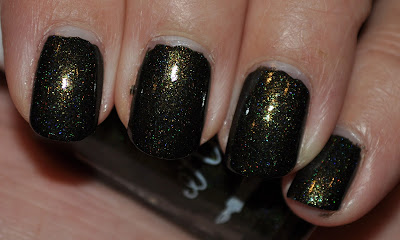 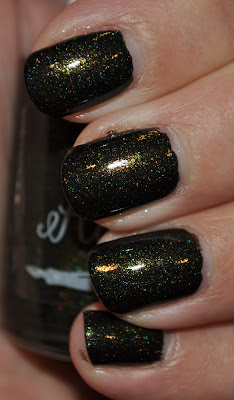 Hey, another gorgeous green! 10/16 is definitely dark, but it doesn't veer into black territory and works well for the darker colors we see in the fall and winter months. I feel like photos don't capture it as well as I would have like, but it's very pretty!
Posted by Cat Ray at 6:00 AM