May the Fourth Be With You Manicure!

Hey all! Today is May 4th, or in the pop culture lexicon: Star Wars Day! Star Wars is the second fandom I ever got into and I am still huge fan. When the newest teaser trailer for The Force Awakens was released, I spent all weekend watching it on loop. SO EXCITED!! Am I the only one thinking it would be cool if a polish brand decided to make a line of polishes based on the movie?!

When the pictures started coming out for the May edition of A Box, Indied and I found out that it had a Star Wars theme, I knew I had to have it. And luckily, I did manage to snag one! I will have a review up later, but I did used a couple of the polishes from the box for my manicure. I've been steadily collecting Star Wars themed polishes from various indie makers and trawled my stash to pick the perfect polishes! I settled on Lacquerlicious Path to the Dark Side, Glisten & Glow Saber This! and Different Dimension Saber That.

Path to the Dark Side is a glitter bomb with a dark blackened base with various silver, blue, and copper glitters of various sizes. I layered one coat of A England Camelot. Then, on one accent nail I used Saber This! which is shimmery blue glow in the dark polish with flakies, representing Luke's (and Obi-Wan's) light saber from the first two movies and on my other hand I used Saber That, which is a shimmery green representing Yoda's green light saber (Luke also had a green light saber in Return of the Jedi).

On my left hand, I used Glisten & Glow Saber This! as an accent nail. 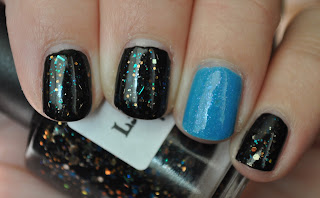 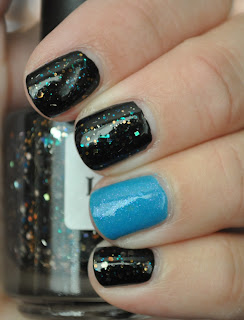 On my right hand (man, it sure is difficult to photograph your Cinderella hand), I used Different Dimension Saber That as an accent: 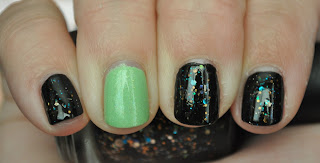 I had completely forgotten that Saber This and Saber That were glow in the dark so last night, when I turned off the lights and they started glowing, I was like a little kid. I even turned the light back on to charge them, haha. Now I can admire my nails in the dark! I love how this manicure turned out, with the two light saber colors standing out against the black of the Dark Side. Perfection! Glow in the dark for the two light saber polishes was definitely the right choice-- I love how they glow.

Hope everyone had a good Monday! Did you do anything to celebrate May 4th? Or any pop culture "holidays" throughout the year?
Posted by Cat Ray at 9:26 PM