And we're back at Friday again, yay!! We had a really fun time tailgating last week, even though it did not go as planned (we had some issues with our BBQ and the wind). My manicure for last week got a lot of compliments-- people were astounded I did it myself. But this week I wanted to go with something simple and easy (and less time consuming) so I turned to one of my favorite line of polishes-- Zoya Pixie Dusts! Ever since Zoya Carter was released, I knew this would be a great polish for a Purple Friday post and hey, this Friday is as good as any to bust it out! Next week is a bye week so I'll have a few days to work on more manicures for future posts!

Carter is described as a "royal purple with a strong magenta sparkling, matte and textured finish" and this is pretty spot on. Carter boosts a stellar formula and applies easily in two coats, so no issues here. At first it went on pretty sheer with the magenta sparkle and I was a little worried, but two coats was great and the purple filled in. Perfect for rocking on a late September afternoon at a football game! My photo made Carter a little more blue toned than it is in real life, where it has a more red tone. 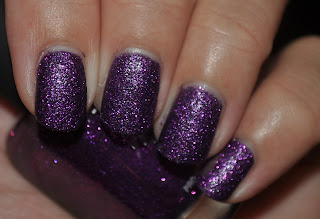 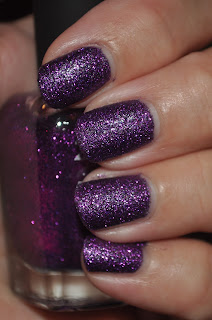 And that's it for this week! I think this is a really stunning purple! Probably one of my favorite Pixie Dusts ever-- the color and the sparkle really makes this polish awesome.