Misa So HOT in Sunglasses

Hope everyone is finishing up a nice weekend-- I'm not ready to head back to work tomorrow! My weekend started out well but got a little crazy by the end. My sister's boyfriend is currently in the hospital and then while we were at church this morning, someone ran into our car and took off without leaving a note. So now the back end of our car has a nice dent in it and is all scratched up-- awesome! So far the rest of my Sunday afternoon has been pretty relaxing, but there have certainly been some stressful moments this weekend.

Tonight I have Misa So HOT in Sunglasses for you. Yes, that's actually how the name is written on the bottle. This is the fourth polish from the Hot Summer collection, which I actually did manage to finish swatching today. Hopefully the pictures aren't too terrible! So HOT in Sunglasses is a great summer red creme, meaning it's a mostly red coral polish that leans orange in some lights and more pink in others. How's that for a description? My pictures seem to capture mostly the red/pink tones, although in the sunlight pictures you can see that it has some orange tones to it as well.

So HOT in Sunglasses, like most reds and/or corals, had a great formula and was extremely easy to apply. There was a little visible nail line with two coats, but with three (what I used in my pictures) it was pretty much gone and quite honestly, two coats was fine to me. I do think it got a little streaky if you were heavy-handed with the brush, but it also seemed to self-level and I don't have any complaints. It dried quickly and looks great even without a top coat. 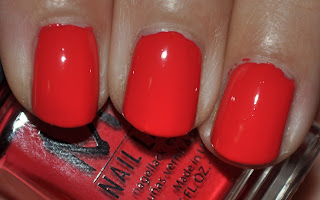 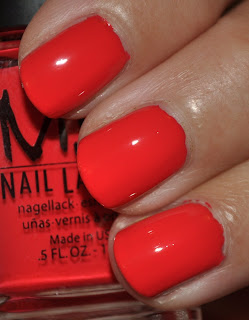 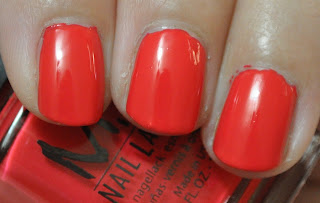 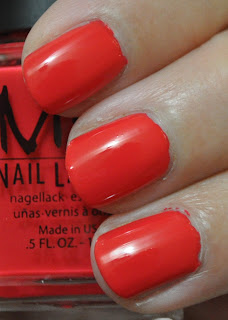 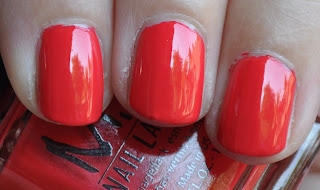 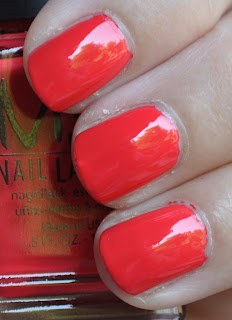 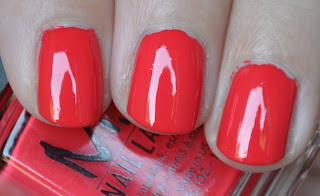 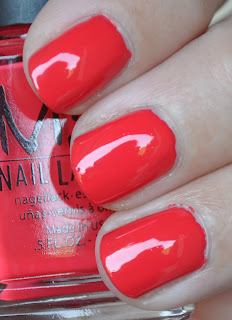 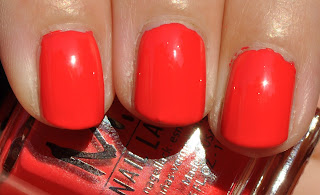 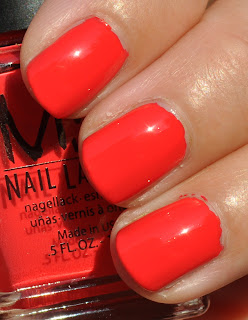 Even though So HOT in Sunglasses isn't a true red, I still think you could get away with this polish as transition shade from summer to fall, or heck, any time of the year! Polishes like this are super flattering on just about everyone and a great staple to have in your polish wardrobe.
Posted by Cat Ray at 8:57 PM