This week is end of regular season football and means that, in general, it's time for all the annual rivalry games that fans eagerly await. Rivalry games, especially in-state (and sometimes, inter-state rivalries) stir up a lot of crazy feelings in the fans and a lot of times, the games are crazy in and of themselves. Our annual rivalry with our other in-state public university, Washington State, is called the Apple Cup... mostly because Washington (the state) in known for it's apple production. This year is a little bit odd because not only is the game after Thanksgiving (it used to be the weekend before), it's also on the Friday after Thanksgiving! This is the second time this year that the Huskies will play on a Friday-- something that is highly unusual for us. Of course, this game is highly contentious in my extended family, as many of in-laws are WSU Cougars, while my husband and I are UW Huskies.

Because it's the Apple Cup, I decided to pull out all the stops. I purchased my first two Illamasqua polishes at the beginning of November, but only just got to play with them because I sent them to my parent's house in Portland (hooray no sales tax!). First I pulled out Prosperity, which is an eye-searing neon purple. I used this on my pointer, middle, and pinkie fingers. Then I pulled out Jindie Nails Geaux! which was inspired by the LSU Tigers (boo, hiss) but according to Jindie Nails description is supposed to be worn to support any football team with the same colors, which UW has. As a superstitious sports fan, that works for me. On my ring finger I decided to go with American Apparel Gold Flash and a UW nail tattoo. Then on my thumb I decided to go back to my very first Football Friday manicure of the season and do the UW football helmet. For that I used Gold Flash, Illamasqua Faux Pas, and the Stripe Rite white stripper polish. Ta-da! 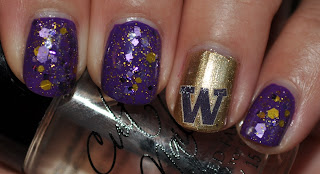 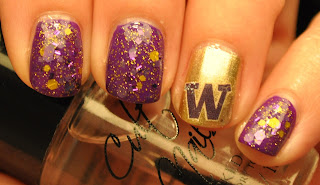 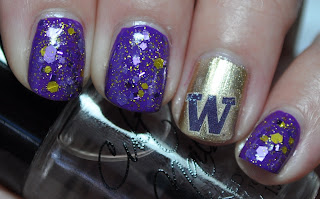 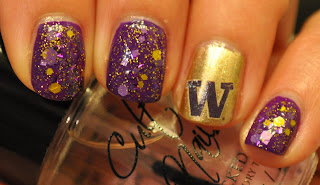 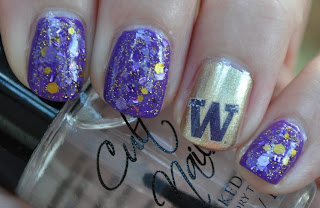 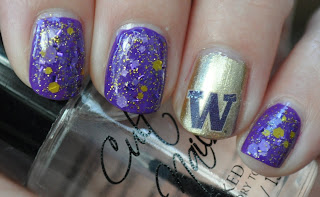 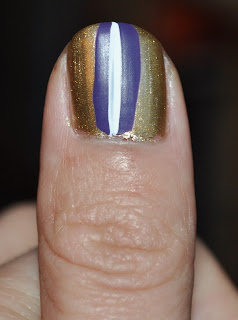 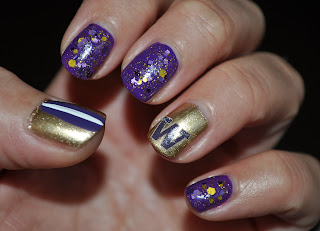