Ok, I didn't end up posting as much I planned last week-- whoops! Trying to get on top of things. I'm only six months late posting about this polish. Today I have the Colores de Carol (yeesh, I have such a hard time typing that) June exclusive, Stargazer. This is my first Colores de Carol polish, and I decided to spring for Stargazer because it was the exclusive polish for my birth month and because the color was pretty unique. Stargazer is a golden beige with a blue/green duochrome shift and holographic finish.

Honestly, I had major issue with the formula of this, but hear me out. When I applied this polish, Seattle was in the middle of majorly hot summer and I think it affected the polish. The formula was on the thick side when I applied it and the brush seemed incredibly floppy, which made it frustrating to apply. I ended up using three coats to get the look I wanted, but probably should have stopped with two, just due to the thickness because the third coat dragged a bit. 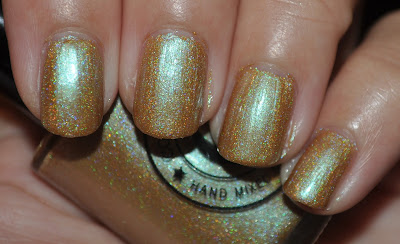 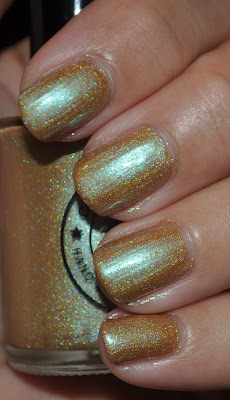 I find the color to be very unique, though the formula was a bit annoying when I applied it-- though I am pretty sure it was due to the extremely warm temperatures. I am less pleased with the floppy brush, but I have a couple more Colores de Carol polishes to try so we'll see if it is all of the brushes or just an unfortunate combination. I'm not ready to give up on the brand altogether-- I'll put it down to bad circumstances!
Posted by Cat Ray at 8:00 AM