Well, I gotta say... last week was above and beyond what I expected for the UW-Stanford match-up. Seriously, that was one of THE best football games I have watched in recent memory. Of course, it's that way because the Huskies put on a dominant performance all around but man oh man-- what a game! This week I'm hesitant to say anything at all, because I want to keep my expectations low and not get too excited. The Dawgs head to Oregon to face the Ducks this week and they are currently our most hated and bitter rivalry. Back in the 90's (and up through the early 00's) the Dawgs dominated, but since then our program fell into the basement and the Ducks have risen to national prominence. It's been 12 (!!) years since we've beaten them, ugh. I have no idea what Saturday could look like. It'll either be heartbreaking or amazing... no way to know until it's in the books! I think I will be watching from behind my hands, eek!

Daily Hues Angelface was originally from the spring collection, which focused on blue and purple polishes and is named after a purple flower. Angelface is described as a "royal purple linear holo." Pretty straight forward, right? In my mind, royal purple might be just a titch darker, but this is a nice purple grape holo. The first coat was a little sheer, though not terrible so, and it built up nicely. I did get a little pooling at my cuticles, but I think that was more due to my sloppy application and not because of the polish. I did end up using three coats, though probably could have gotten away with two. 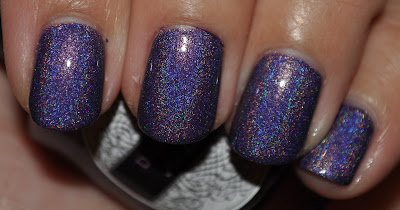 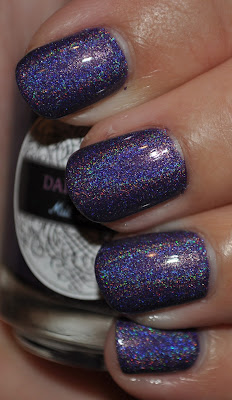 I think this polish is gorgeous. It's not as deep as some of the other purple holos I have, but the color is great-- it straddles the line between being too light and too dark, and honestly, I don't think there are a ton of purple holos that actually do that! The holographic flame is good and so I'm pleased all around with this! I'm still hoping to do some nail art for some upcoming Purple Friday posts so it's not just swatches of purple polishes... just trying to get motivated and inspired! Maybe with a bye week after this I can come up with something fun!