Today I have a relatively new polish to share with you-- and one that I had actually been stalking the local drugstores for. This is Maybelline Clearly Spotted, which is part of Maybelline's Polka Dots collection, which is a collection of five black and white glitters in different bases. I really wanted Clearly Spotted because it was the one with a clear base (the others all have colored bases, which seem fairly easy to duplicate). It seems like a lot of mainstream brands are following the footsteps of indie brands and trying to make some more unique polishes-- there are a lot of black and white glitter polishes out there, but they're each a little different. It's nice to see the bigger brands doing something different. In any case, as I was stalking various drug stores, I saw a lot of miscellaneous bottles from the collection, but I had to wait until a brand new drugstore opened up two blocks from my work location before I managed to get this.

As I said, Clearly Spotted is a mix black and white glitter (large and small hexes) in a clear base, so you can wear it over anything. Here I have it layered over my Essence Cafe Ole and Cult Nails Mayhem manicure. Here I used one coat, and that was good enough to get plenty of glitter onto my nail. I found this polish to be generally easy to work with, though the larger pieces of glitter did want to migrate around on my nail so I had to be careful of that. This also was a little bit of a top coat eater-- I used one coat of Sally Hansen Insta-Dri and when it dried down it wasn't completely smooth-- but definitely not lumpy or textured enough to really bother me, so I only used one coat. This might not be an issue with other top coats, but just a head's up. 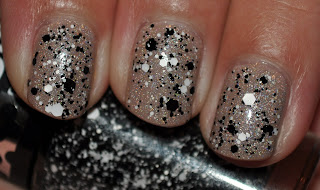 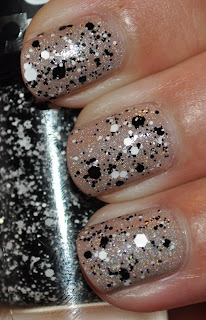 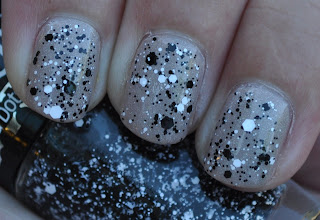 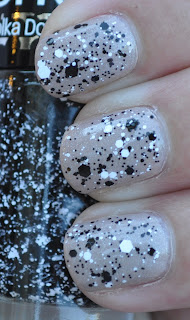 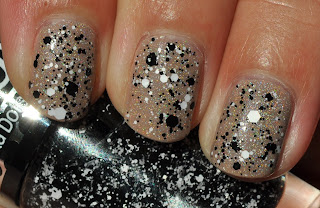 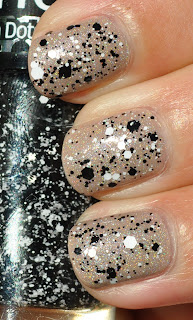 This is actually my first black and white polish, and I'm glad I finally managed to snag one. This probably won't be my last, either! I really like this over the neutral base color, and that some of the holo sparkle is still visible! Plus, it was a nice way to perk up my mani and make it last a few more days. What's really great about these black and white glitters is that they are extremely versatile, so I'm looking forward to trying this out over other colors.
Posted by Cat Ray at 9:05 PM