And last but not least, today I have the Colors by Llarowe February 2017 POTM, Siren's Song. This is described as a "blurple linear holographic with color shifting glitters that shift green to red to gold." I have to say that adding these types of shifting glitters to a holo seems to be very in right now-- I know Enchanted Polish released a whole series of these (which you will eventually see here if I ever get around to it) so I guess CbL is also hopping on that band wagon. Not that glitter + holo is a new thing but these particular combinations seem to be big right now. And I'm sucker for a purple and love the color shifting so it's all a win win for me!

I used three coats here and maybe should have only used two as this did get a little thick. Siren's Song is definitely a bit thick to begin with, though definitely not unworkable. I think three coats was overkill as this is pigmented enough that two coats should be fine! The glitters are nicely distributed and while they do want to migrate to the free edge a little, it's not a lot of work to fix that. I how rich the purple looks! 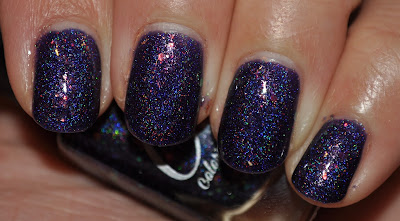 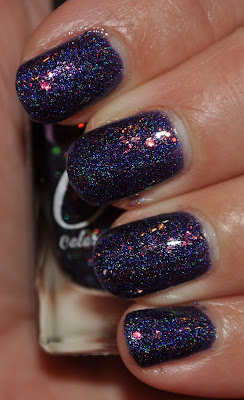 Here's an outdoor shot where you can see more of the shifting glitter (please ignore the chip on my index finger-- I was in the middle of packing the car when I stopped to take a photo and noticed it, wahhh). But you can actually see how the glitters change color! 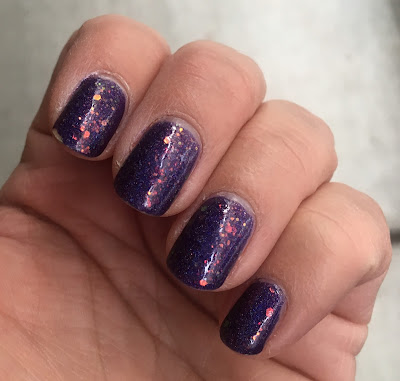 I thought this was really pretty but oh man, I probably need two layers of top coat because this chipped like the dickens on me, starting the day after I applied it. I hate that! Aside from that minor annoyance, though, this is very pretty and I'm happy to have it in my collection.
Posted by Cat Ray at 6:00 AM