Happy Thursday! My posting schedule is shifting a little again, like I mentioned in Tuesday's post I will either have a reduced number or no posts the last couple of weeks in October due to some traveling, but also I realized I need to wear some more polishes! I'm running out of previously worn/photographed polishes to talk about and so my posting schedule will also probably be a bit lighter. Currently I'm only changing my polish about three times a week just due to scheduling, and I don't have much in reserve right now! I honestly need to go back into my old hard drive because I'm pretty sure I have unworn polishes there that I need to share with you, so maybe I'll have time for that one weekend soon. Today I have one of the Enchanted Polish monthly mystery polishes to share with you-- this year the monthly mystery polishes are shimmers (instead of holographics) and the one I'm going to share with you now is August 2016.

August 2016 is a neutral toned beige with pink shimmer. I only used two coats here!! That's pretty impressive for a nude polish. Honestly, though, I only used two because I knew I would be layering a glitter topper over it-- if I had been wearing it alone I would have put on a third coat just to be thorough. But really, it almost doesn't need and I'm really happy with the formula. I did use a lighter touch, anticipating possible dragging/streaks which may have helped, but it does look really good! 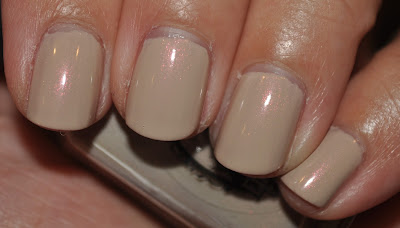 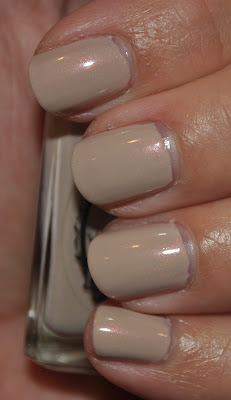 Sometimes a clean, elegant nude manicure is what you need and August 2016 fits the bill. I think the pink shimmer gives it a nice depth and keeps it from being just another neutral polish. I think this would be flattering across a wide range of skin tones as it walks the line between being too pink or too yellow. The formula was great, which is plus because the base is so light. Even at two coats this is mostly even and there is maybe one minimal thin spot. I'm impressed!
Posted by Cat Ray at 6:00 AM