(Quick note: I tried to get this up as soon as I could, but it looks like the box is already sold out/gone from the shop. Sorry!)

Oh yes, a new box from Sunny's Body Products! I have been eagerly anticipating this box since it was announced. This is a super sized box, which included 12 products-- including two brand new ones: lip scrub and dry spot healer. I have been especially excited for the lip scrub; it's no secret that I'm a huge fan of these products and I had even been thinking I would suggest a lip scrub as another product-- so I was super excited when she announced this was coming! Let's see what we got!

First up, let's look at the lip products! I am a huge soda addict (well, I say pop instead of soda, but anyway) and so I was really anxious to see how I would like these scents. The Lip Balm is Dr. Pepper, which as it suggests, smells just like the drink! And it does! And here is the product that I have been waiting for: Lip Scrub! The scent of this one is Mountain Dew, which as advertised, smells just like the drink! Mountain Dew is probably my favorite kind of pop (aside from good old Coca-Cola) so it's probably no surprise that I freaking love this. It has a bright citrusy scent and a little goes a long way-- you don't need a lot. This left my lips feeling clean and smooth, but not dried out or raw. 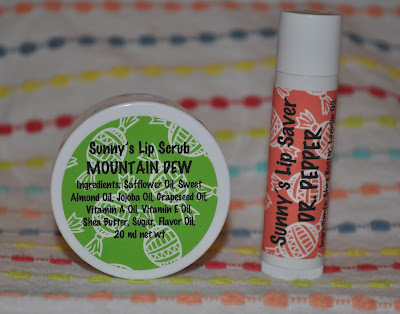 Next up, let's check out the oils! The regular Cuticle Oil is Fruity Pepples, which is described as "sugary and sweet; smells just like the the yummy cereal!" And yes, yes it does. I could sit there and just huff this scent! This scent has me craving Fruit Loops and other sugary cereals and smells exactly like them! It has a nice tang to it to prevent it from being too sugary, and I looooooove it. The Intensive Cuticle Therapy is Sour Patch Kids which is described as "tart, tangy and sweet just like the candy." No complaints here-- it does smell like liquid candy! 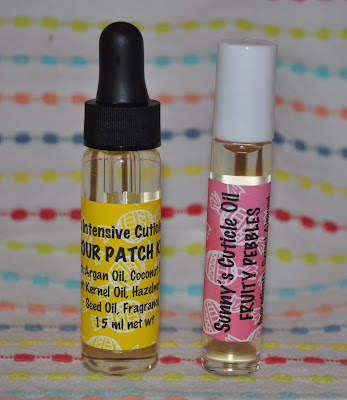 Next we have the lotions. First we have the On The Go lotion in Krispie Kreme! This is described as "warm, sweet, sticky and sugary goodness that is glazed donuts." I'll be honest, I love the OTG lotion in general, but I was not a huge fan of this scent. It smells like Play-Doh to me! Which isn't a bad thing; I like Play-Doh! But it didn't conjure up donuts to me, hah. The Triple Thick Lotion is Cadbury Easter Egg which has a strong chocolate scent and then a lighter, fluffier marshmallow scent underneath. The chocolate scent is the strongest and it's not my favorite, but I do love that this lotion now has a pump! Woo! 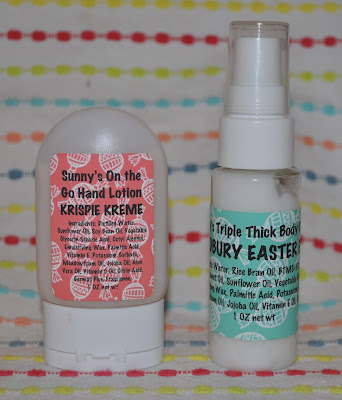 Let's talk body products next. The All Over Body is Marshmallow Peeps, which is described as "buttercream and vanilla folded into white fluffy marshmallow reminds us of those yummy marshmallow treats shaped like bunnies and chicks from when we were kids!!" While I'm not actually a huge fan of eating peeps, I do love the marshmallow scent here! We have another new product here-- the Dry Spot Healer! This has a Cola scent which is described as the "awesome aroma of real carbonated cola. You can ALMOST FEEL the fizz!" I would totally agree with this. It smells exactly like fizzy glass of cola and I love it! The Dry Spot Healer has a thick whipped texture, sort of like the Bath Whip and is a little on the stiff side but melts pretty easily into the skin. Very moisturizing-- I have been using this on my dry elbows and they are much softer and smoother! 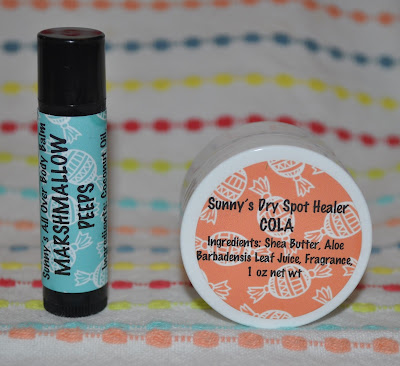 As I'm grouping by twos, here are the hand products!  The Hand Butter is Animal Crackers, which is described as "crunchy, creamy, vanilla lighted toasted cookies." This almost has a light citrus hint to it and I really like it. Very light and not overwhelming at all. The Miracle Balm is Rice Krispies, which is described as a "whipped marshmallow, vanilla and sweet sugar." I am really craving rice krispies right now; I haven't eaten them in ages! I love how this smells. Plus the Miracle Balm is amazing so I love this, full stop. 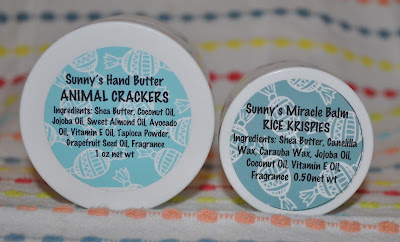 Last but not least, our remaining products are the Bath Whip in New York Cheesecake, a "cream cheese, vanilla, butter, condensed milk, sticky caramel and graham cracker crust all mixed together for this unforgettable scent!" I don't love this scent, probably because of the butter note, which is a real shame because I love the Bath Whip as a product. Maybe when I actually use it I will like it more! The Hand Scrub is Cookie Dough which "smells as if you are baking in the kitchen! A lovely mix of sweet sugary dough and chocolate chips." The more I sniff this, the more it actually does smell like cookie dough. At first I wasn't sure if it liked it, but the more I sniff it, the more it grows on me. 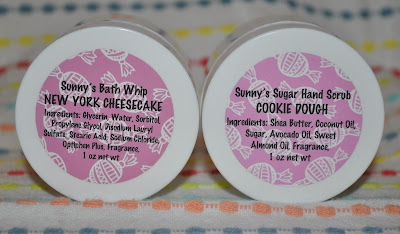 All in all, I loved this box and am a big fan of Sunny's products. Yes, some of the scents are misses for me, but-- we can't love everything, right? Plus, scents are incredibly subjective so sometimes even when a description sounds good, you may not love the actual scent.  I am really loving the new lip scrub and dry spot healer, and I can't wait for Sunny to introduce more new products!
Posted by Cat Ray at 8:00 AM