Hey all! Hope everyone had a good Tuesday! My day could have gotten off to a better start, but it ended up being ok. Seattle is experiencing a small heat wave (not uncommon for May) so we got our window AC units up tonight-- more for the kids, but we benefit as well, haha! Piggy backing off yesterday's cantaloupe post, today I have another polish along the same color lines. Today I have Julep Janet, which was from the March Maven POP! Collection. In this box Julep introduced a new "soft focus" finish and there was a trio available as an add-on. Being a sucker for these matte/satin finishes, I of course had to pick this up. According to Julep, soft focus means "semi-matte" and these polishes dry to a soft, eggshell satin like finish-- there is a bit of shine to them. This seems very similar to the Essie Cashmere Mattes that were released earlier this year.

Janet is described as a "pale peach soft focus" and I would amend this slightly to say it's a peachy neutral. I think in person it looks a bit more peach, but my photos seem to mute the peachy tones a bit. The formula on this was definitely a little bit tricky-- a little on the thick side and it wanted to streak when I applied it (and it didn't want to self level). A light hand is definitely needed when you apply this! I used three coats here, mainly to even it out rather than because it was too sheer or anything like that. With the semi-matte finish, this does dry fairly quickly, though you do have to be careful not to dent it while it's drying! 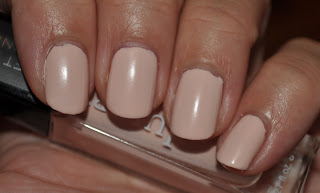 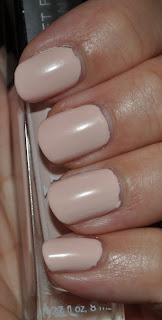