Lou It Yourself Bye, Felucia

I was scrambling to find another polish based off a Star Wars planet and remembered I had Lou It Yourself (now Bluebird Lacquer) Bye, Felucia sitting my stash. This was released towards the end of last year in the lead up to the release of Rogue One. The polishes were all Star Wars themed, of course, but not specifically related to Rogue One.

Bye, Felucia is named after a jungle planet we only see briefly in Revenge of the Sith, when Jedi Master Aalya Secura is gunned down by her clone troopers, but we do see the planet Felucia several times through out the Clone Wars series as it was involved in several conflicts through the war. Bye, Felucia is a deep blue with a strong red copper shimmer running through it. This is nicely pigmented and not too thin or too thick-- the first coat went on a little sheer but two coats covered very nice. In fact, I went to apply my typical third coat and decided that it would be overkill. So only two here! 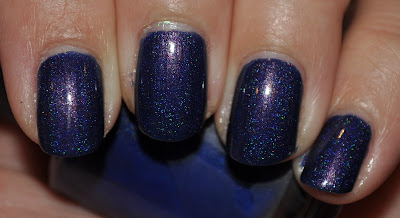 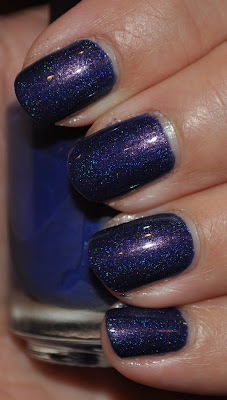 Welp, this ticks all my buttons. Blue? Check. Shimmer? Check! Holographic? Check! So all around we have a winner. The red shimmer lends a slight purple tone to this polish, but overall it still looks blue. The holo sparkle is subtle, but doesn't disappear. So I love this, full stop. Definitely one of my favorite that I've shown you so far!
Posted by Cat Ray at 6:00 AM