Next up on our tour through the Star Wars galaxy we have Leesha's Lacquer Planet of Lost Beauty, inspired by the gone (but not forgotten) planet of Alderaan, which was the home of Princess Leia until it was destroyed by the Death Star in the original Star Wars. This polish was part of last year's Nouveau Geek Star Wars box (which of course I had to have) and is a metallic turquoise with blue/green flakies. Unfortunately, my first bottle of this arrived smashed (noooooooo) but I was able to get a replacement, whew!

Planet of Lost Beauty had an ok formula, though was a little on the thick side and the flakies wanted to migrate to the edge of my nail. The turquoise base is metallic in nature and so a little bit more frustrating to work with, and doesn't look quite as smooth as I would like in my photos, though I don't think it was as noticeable in real life. I ended up using three coats here, though I probably could have gotten away with two. 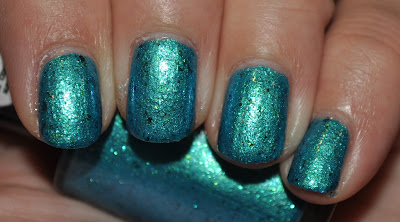 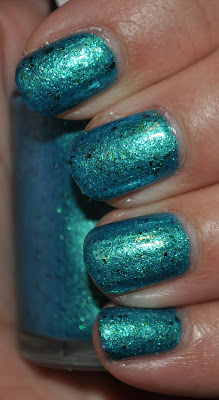 I have mixed feelings about this polish but basically come down feeling a bit meh about this polish overall. I like the inspiration and I think the polish is pretty, but I am less impressed at it's overall appearance and formula. I mean, it's not bad, but I'm also not 100% in love with it. Ah well, it is still pretty!
Posted by Cat Ray at 6:00 AM