That's right, we're having two boys! We still don't know for certain if they are fraternal or identical, but it's for sure two little boys. Once you see it on the ultrasound, you definitely can't mistake it for anything else! I had another growth ultrasound this weekend (with twins you get to see the doctor every two weeks and have a growth ultrasound every four weeks) and the boys are looking good-- they are estimating them at slightly over a pound and a half each! Meanwhile we are busily working on getting our house ready for them (ack!), which means we're going pretty much much nonstop-- or at least my husband is.

We've actually known for several weeks now and I had a manicure all planned-- I just haven't gotten around to posting it yet-- sorry! Initially I tried to do a sponge gradient, but I was really displeased with how it turned out in the end. Maybe I'll show it to you guys later, but I'm still a bit bummed it didn't turn out like I was hoping when I look at the pictures I took, so I can't quite bring myself to post it yet.

In the end, I had to go with blue because hello--boys! After my sponge gradient didn't work, I went for the next best option: ombré! I always love how these manicures look, yet haven't actually put one together yet. No time like the present, right? 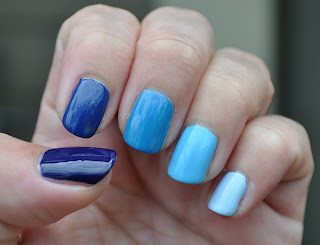 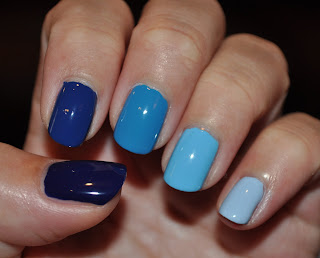 Aaron and I are really excited to welcome our boys (how crazy is that?!) to our family-- maybe when they're still little I can paint their toes and they'll like it! Or, if they're identical, at least use nail polish to tell them apart, hah!
Posted by Cat Ray at 5:08 PM