Oh man, the end of July has really thrown off my posting, which was not my intent. I'm just busier than anticipated and we have had a lot going on and I'm just not on the ball-- in fact, I even wore one polish for FIVE days because I just had no time to change it! That's very unusual for me! I'll try to get some posts scheduled this weekend so I can get back on top of things; it's already August and I have a ton of summer colors that I have been planning on wearing and blogging. Oh, so many things to do! Today I have a fun throwback polish on the blog! Damone Roberts 1968 has actually been released three times that I'm aware of; I got my polish from the third release (second re-release?!) so I can't say how it compares colorwise to the other two, but I *think* they are all pretty close. Has anyone actually done the comparison? Anyway, Damone Roberts 1968 is based on the color of paint used in his salons in CA and NY, and which Roberts describes as "a unique pistachio... a different green with undertones of a soft grey, and a warm brown that works well on every skin tone." Personally, I see a lot of yellow tones in the and more than pistachio, this polish gives me soothing jade vibes. I'll be honest, I'm not even all that familiar with Damone Roberts, but I guess he is an eyebrow guru! I do love a well maintained brow-- mine grow crazy long so I have to have them waxed and trimmed on a regular basis.

The formula of Damone Roberts 1968 was good! A bit on the thin side, but nicely pigmented and easy to apply. I used a light touch to avoid any potential streaks and it covered well in two coats, though I did use a third for good measure to make sure there weren't any thin spots. I didn't have any issues! 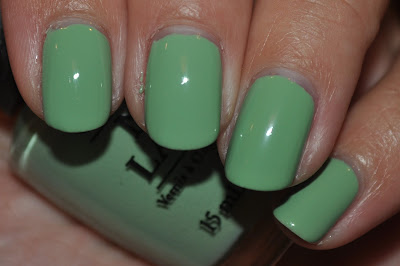 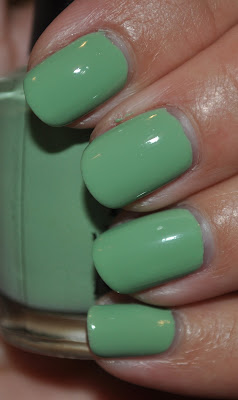 Like many of my polishes, I'm not really sure why I let this one sit around for so long because I really liked it! OPI was pretty much my start into "serious" nail polish and even though I actually don't reach for many OPI polishes these days, picking up a bottle is like running into an old friend. I feel like this shade of green is very soothing and very flattering; while I don't normally gravitate towards greens there was something about this that I loved. I was actually sad to remove it after wearing it for a couple of days! It's such a lovely, soft color.

I bought my bottle on Amazon for $10 (and I had rewards points so I actually just had to pay shipping) and it says it's from Damone Roberts, so I'm pretty sure it's legit. It's also still available on the Damone Roberts website if you'd prefer to buy it direct.
Posted by Cat Ray at 6:00 AM