Ok, it's not secret that I love the Olympics. Yes, I'm a day late as the Olympics kicked off last night with the Opening Ceremony but that's my life. This is just a simple manicure I to celebrate the games; no nail art or anything. I was wracking my brain about what to do and then I remembered that I had a beautiful gold polish sitting around unloved: Daily Hues Goldie. What better that the color of the ultimate Olympic prize?

Goldie is a deep, rich golden yellow; it's also described as a "a bright sunflower yellow/gold with gold flakies throughout." This does have a metallic finish so it does want to streak; I tried to take as few strokes as possible while I was applying it. I wasn't quite perfect but the streaks aren't super noticeable in real life. The flakies did look a little bumpy in the metallic finish, which is a little unfortunate. The formula, though, is otherwise pretty good though I didn't have any actual issues applying it (except trying to avoid streaks). I only used two coats here and you can see I have nice opaque coverage; it's was very close to being a one coat wonder. In the future I might sponge on a third coat to try and eliminate any streaks but it could be much worse. 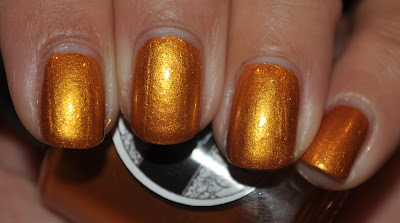 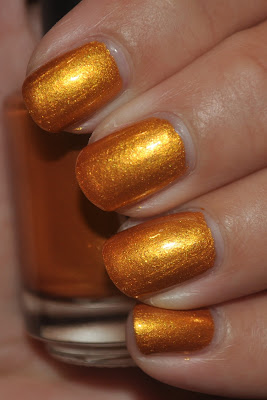 I wasn't completely in love with the finish (the flakies look bumpy and I'm not a fan of the metallic streaks) but otherwise I think this is a truly lovely deep, rich gold polish and I don't think I have anything else like it in my collection. Perfect for celebrating all the Olympic hardware that's coming in the next two weeks!

Will you be watching any Olympic events? I'm be focusing on swimming and gymnastics but will be definitely trying to catch a bunch of other events as well!
Posted by Cat Ray at 6:00 AM