Level Up Lacquer The Dark Side

We're still looking at the villains of Star Wars, but today I'm taking a slight shift to focus on the power that binds them all together: The Dark Side (of the Force). While not all the villains in the SW universe are Force users, the leaders like Darth Sidious and Darth Vader have a strong connection to the Dark Side and it is a thread that runs through all the movies. To this end, Level Up Lacquer made a polish, The Dark Side, to give her interpretation of this power.

The Dark Side is described as a "black jelly with a purple red shimmer and red and black holographic glitters. This polish looks great over black, or can be built up over several coats." This is pretty accurate! The polish is really really really sheer with just one coat; I was a little freaked out when I first applied it but decided to soldier on. It built up nicely once the foundation was laid, so to speak, and subsequent coats had more glitter and gave a nice final look. I used three coats here. 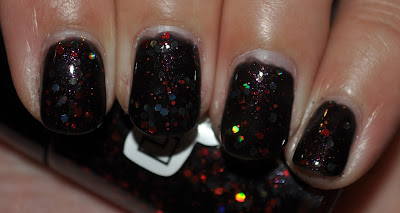 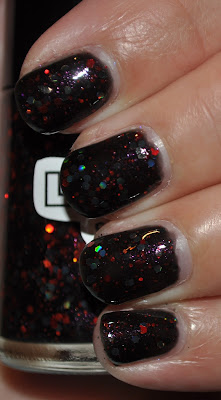 And because I now have a matte top coat I like and is readily accessible (seriously, organize people!), I'm pretty much matting all my glitters. Why not?! 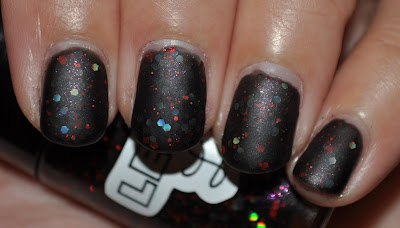 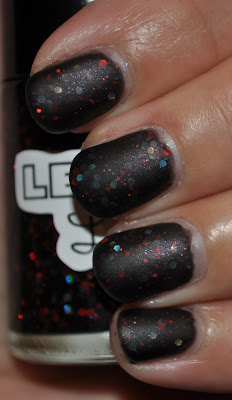 I'll be honest, I was really worried when I first applied it. But I kept going and was ultimately rewarded, so whew! This is a very pretty polish and I love the mix of glitters. I continue to enjoy the polishes I bought from Level Up Lacquer-- I look forward to showing you some more later!
Posted by Cat Ray at 6:00 AM