Switching gears again, the next few polishes are dedicated to one of the most iconic science fiction star ships out there: the Millennium Falcon! (Or if you've ever watched Robot Chicken, the Aluminum Falcon... just watch the video below.)


ANYWAY.... the Millennium Falcon. Iconic space ship won on a gamble. Might not be appealing to the eye, but she is more than the sum of her parts! Dollish Polish Millennium Falcon is described as a "bright silver with loads of holographic glitter, which bursts into a rainbow of colors when the light catches it." Yes, that covers it! This version of the Millennium Falcon is the ship at its best-- shiny, fast-- the best damn ship in the galaxy.

The formula on this was pretty good! It was a little sheer on the first coat, but built up nicely. I used three coats to make sure I had the coverage I wanted. It's sooooo sparkly and gorgeous. 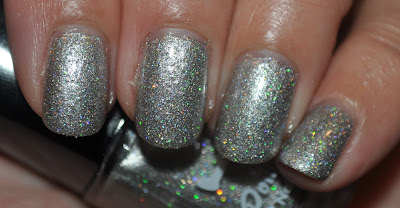 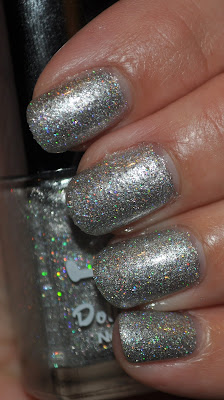 I don't really think my photos do this justice, but hopefully you can appreciate how sparkly this is! Granted, the Falcon isn't as beautiful as this polish, but I imagine this is how Han sees her. And frankly, probably how fans saw her when she showed up in The Force Awakens. I love how shiny and sparkly this is!
Posted by Cat Ray at 6:00 AM