Today I have the polish I actually wore for Christmas! Colors by Llarowe Arc de Triomph was a limited edition polish for the Indie Shop California event, but several makers were kind enough to release extras/make more available to those of us who couldn't attend. I saw a bunch of swatches of these polishes and instantly fell in love-- especially because I have been to Paris and so these polishes called to me. Plus I'm a fan of the CbL line anyway, so it wasn't a real hard sell.

Arc de Triomph is described as a "silver linear holo with gold flake and golden shimmer. This polish looks different in every light. It will look silver, taupe or brown based depending upon your lighting." This is so true! I thought the gold flakes and shimmer would make it appear more golden but it was definitely more silvery and darker than I expected. The formula was good-- a little thick as a lot of CbL polishes tend to be but in a good way. This went on easy and I didn't have any issues. I probably could have used two coats, but did my standard three to make sure my coverage was complete. 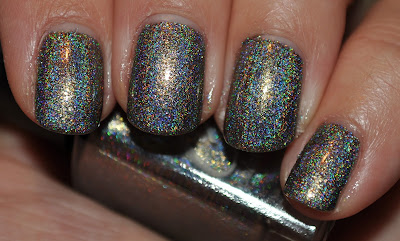 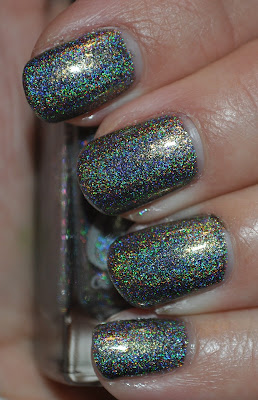 I have to say, at first I was a bit disappointed in Arc de Triomph, mostly because I felt that the photos/swatches I had seen of it made it look a lot different than how it looked in person. I think I just didn't realize from the outset that it was actually more silvery and a lot of the photos I saw made it looks more silver/gold when I would say it skewed darker silver/platinum. BUT... I still ending up liking this. It looked lovely on and worked well with everything! It was maybe a bit darker than I wanted but that's ok because it worked out in the end. Unfortunately the holographic masked the flakies in these photos, but you could definitely see them in low lighting.

Unfortunately, this polish was a limited edition run and is now sold out and I don't think it will be back, but you never know! Happy Monday-- hopefully you have a holiday or at the very least a quiet day.
Posted by Cat Ray at 6:00 AM